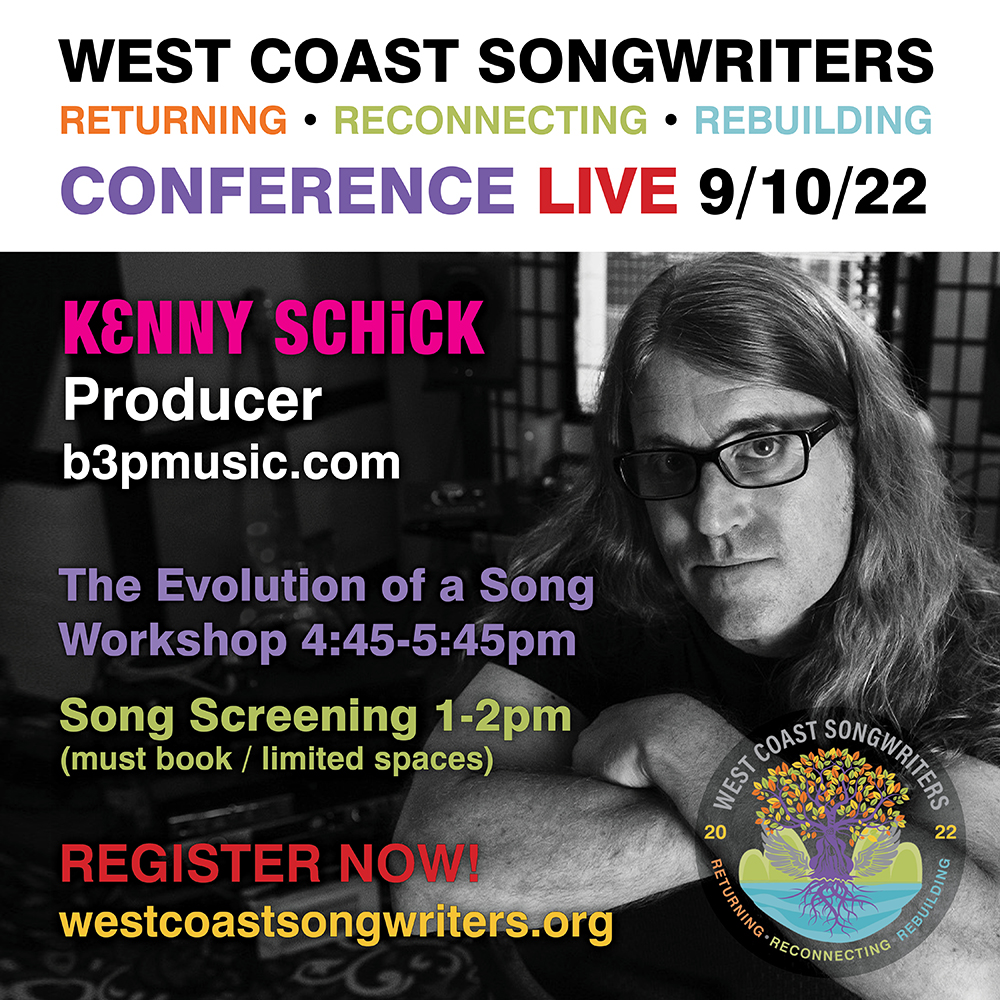 The Evolution of a Song – this year’s workshop will take the participants from demos to masters. Kenny will talk about how a song is built and what to think about as you are creating. These workshops are always popular because they are filled with so much information. There is time to ask questions and importantly Kenny makes them fun.

The 2022 Conference is WCS’s 42nd Anniversary and the longest running continuous music conference of its kind in the country. This event and all others (15+ per month) are run by volunteers and have been for 40 years and on a shoestring budget.  You will get a chance to meet fellow musicians and industry leaders volunteering their time to mentor in the full day of seminars, workshops, and mentoring sessions in an intimate setting.

Conference participants are provided the rare opportunity to:

West Coast Songwriters is announcing a Youth Scholarship for it’s upcoming Annual Conference Saturday September 10, 2022. The Youth Scholarship will be for 22yrs and under.  Applicants must submit the form LINK below along with a an essay (250 words or less) on what they would hope to get out of attending the Conference and links to their music – website, youtube, soundcloud, etc. The application PDF should be sent to [email protected]

If you are unable to submit the application electronically you may mail a hard copy plus CD to West Coast Songwriters 303 Twin Dolphin Drive, Suite 600, Redwood City, CA 94065.  Winners under 18yrs must have signed permission and release form signed by parent or guardian to participate.

The Fixer is a bit different than songs I’ve been making over the last 15 years or so.

The Fixer is a dynamic and well performed piece of songwriting. The arrangement is compelling building up and down. The instrumentals are fantastic. Solid performances and excellent musicianship. I dig the energy and appreciate the musicianship! Music On The Moon

Though some of my songs always tend toward the longer side, not too many stretch to the 7 1/2 minute mark.

I’m a fan of big crunchy guitar sounds, but it’s not a texture I use too often as the main ‘sound’ of a song. I’ve been in bands in the past that have certainly centered around this type of sound.

Fun track. I like the quality of the production, the drums sound punchy and it feels textured and intricate with the variety of percussive elements and well placed guitar melodies.  The flow of the chorus is pretty amazing though, instrumentals are well synced and vocals sound more convincing there.  Had a great time listening… Bregt C Alpas Records

This song sprang out of an instrumental germ really. Originally, the whole song was just the minute plus intro as an instrumental piece written for a tv placement. However, I wanted to hear more of the story it was trying to tell. It has a Tool vibe – that crunchy dark sound flavored with world music elements. So I started to build on the piece like the Winchester Mystery house. It had no lyrics at first, but I built it more into a song form and figured it would start to inspire some lyric writing.

I like the tension and dynamics of the guitars a lot, they create movement and keep your record interesting. Drums have a nice groove and cut really well trough your mix. I like the lyrics of the vocal a lot… TC21

The idea for the lyrics started to come while we were watching the TV series Ray Donovan: it just struck me how weird it is that there are people who get paid by wealthy famous people to ‘handle’ their sometimes enormous indiscretions & crimes. It’s curious to me that people could find the mindset and skillset to lead them to this ‘profession’. Spending my life in solitude mostly, working alone in my studio. I no longer get into any of the intense, dramatic overly-emotional situations of my younger days (lol). I find it useful to take on characters and become a musical ‘actor’ for song inspiration now.

A very interesting production here, with a nice melodic structure. The sound is beautifully constructed… Alfitude

Video was made by Jessica Fong ADAPTED CREATIONS. 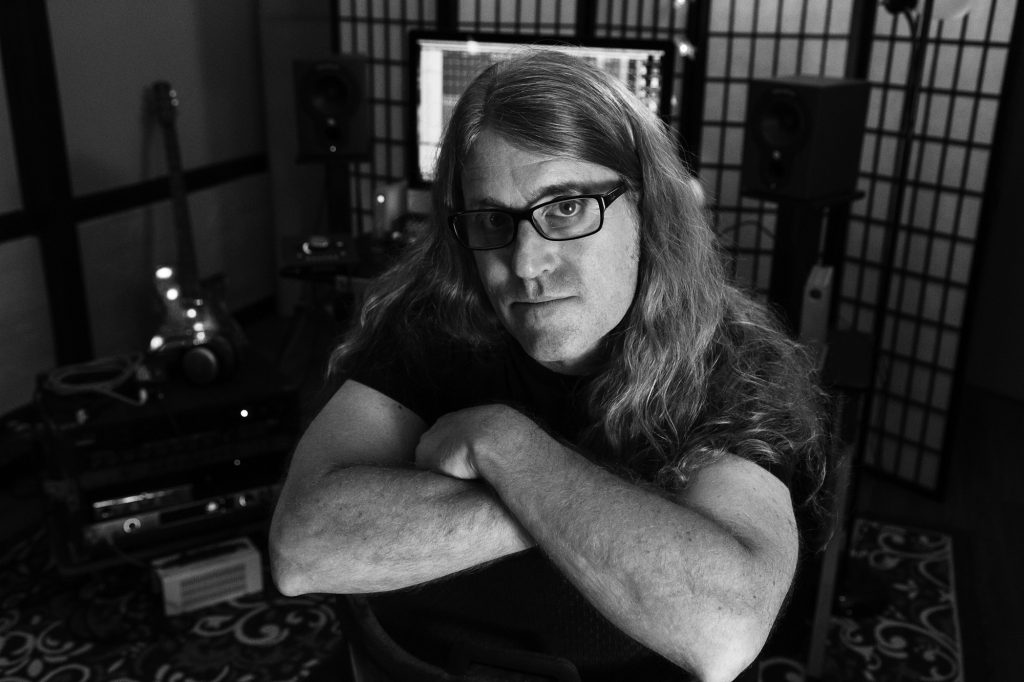 To our dear family, friends, artists and clients we were honored to work with this year!

We wish for you a lovely holiday season and a better 2021!

Falalalalalalalala! We know every single person in the world has been struggling to some degree this year. It’s been tough, it’s been hard, it’s been sad, it’s been frustrating and downright crazy. However, there were good things too: watching and re-watching great tv shows, learning to use zoom, growing a garden, cooking more, nurturing a love of wild birds and discovering tiktok. I’d love to say we did more or learned many new skills and crafts, but the uncertainty of the world put inspiration at bay. Kenny did have time to produce a few of his own songs, and we released videos for them, so that was good.

We are lucky to have always worked from home/studio, so that was not so different for us. As we did not travel this year we really miss our family and our friends in California more than usual. We stayed home, we stayed safe, wore masks and kept our distance from other humans. We still went for walks at Shelby Bottoms park, but could not pat every dog that walked passed us (which was super hard) and we had to psych ourselves up sufficiently to buy essentials from the supermarket.

What gave us joy was still being able to work with wonderfully creative souls who all made fantastic music this year! Surprisingly and thankfully, we were busy.

So onward to a hopefully better year! We wish for you a Happier New Year and hope you enjoy this different kind of holiday season! Make yummy food, nap, go for walks, call and zoom friends and family, watch movies, play and/or listen to music.

Kenny enjoyed making this Christmas Song for ya’ll – (as with all his songs he did everything, production, performance, orchestration, mixing & mastering) hehe, my sister Jessica Fong in Australia made the super cute video (in record time) with the help of my niece Caitlyn and I (Sabine) did the graphics. A very family affair!

c’mon no one else can sing your song

C’mon C’mon C’mon started its life on a different trajectory than it ended up on. Originally, I was writing a song for a placement opportunity, and the basic feeling was supposed to be ‘nostalgic’. I got that part moving along just fine, and as it’s written now, that part would have worked out. Samples were given as an idea for the type of sound and feel they were looking for which lent toward a melancholic pop/indie vibe. Usually, that is right up my alley, as well as those familiar music know. But when I’d play the song, which at first was just on acoustic guitar, I kept playing it at a certain speed, and that speed took it out of a melancholic feel. I tried to slow it down and make it more weepy, but nope, this song wouldn’t have it.

I abandoned my initial mission, forgot about the placement, and served this song as it wanted to be served. It just wanted to be kind of a Brit pop type thing—a hair punky, with an upbeat feel. There was a whole other section of lyrics in the bridge, which is just instrumental now—where the widdley-woo guitar solo is. They were cool, but it was murky and just wasn’t working, so I went for some guitar fun, which fits the theme of the song, as it ended up being about my musical journey in a way, and it was ripping guitar riffs that pulled me into music in the first place.
The idea of the song is that musical styles, and even fashion styles (which often accompany music styles) always seem to repeat and come back around again… what was in style once will likely come around again—I mean, how many times has punk rock come and gone now?
We saw a time in the 90’s when the old swing sound came back around again (and everyone sounded like an updated Cab Calloway), rock-a- billy had it’s day again in the 80’s and brought with it that 50’s fashion, and here in Nashville on our favorite local radio station, Lightning 100, I hear so many bands that sound like they’ve revisited the 70’s and 80’s again for inspiration.
I’ve had a few questions asked of me regarding the line ‘the drink and then the sound is brown, ’til the strong and clear take down the town…’ — the brown drink is whiskey, the brown sound was what Eddie Van Halen’s sounds was labeled. Both of those fell out of favor at some point, but now we know bourbon is the big thing again after the years when strong, clear liquors became popular and almost destroyed the bourbon industry— and the 80’s saw that more clean sound (drum machines, clean guitars, etc.) swallow the big guitar sound. Then came the whole grunge movement and ‘alternative’ bands like Tool, Dinosaur Jr., and Smashing Pumpkins that brought back the wall of sound again.
And so it goes…round and round… what you like may pass out of favor, but it will come back around.
So sing your song!
WATCH THE VIDEO 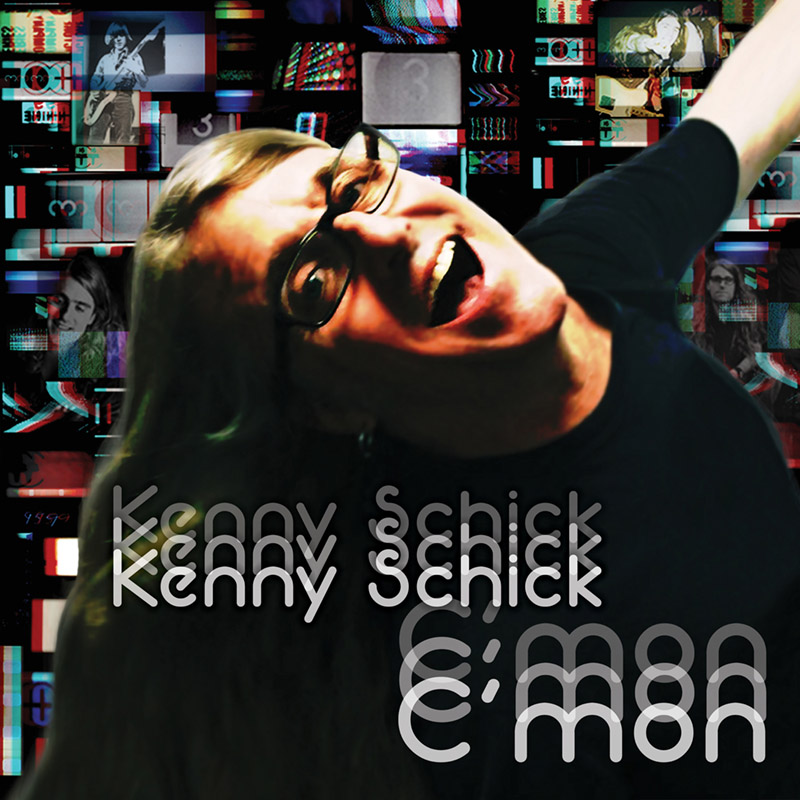 it’s new, it’s old, it’s bought and sold
the salvage yard then solid gold
and should it stand the test of time
rewrite the lines repeat the rhyme